It’s not always easy to #GrowFoodEverywhere. Today is supposed to reach 107° here in the Southeastern section of Arizona. It’s already 100° at 11am. Got out early to water. It will be nice when some of the water saving strategies kick into full gear; Hugelkultur, mulches, ground cover plantings, food-forest-like layers/micro-climates, rain water retrieval, etc.

When grown under hot sunny conditions the foliage assumes a metallic bluish cast that creates the perfect backdrop for the scores of vibrant blue flowers that appear with the onslaught of hot summer weather.

Much like the Mexican Petunia, I consider myself a “heat seeking flower”. Born in late June may have something to do with it, but also not having an especially well functioning thyroid, cold is much harder for me to tolerate. Fortunately, our winters are mild enough and mostly short lived, meanwhile working on nutritional remedies for improving thyroid. 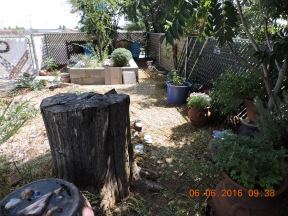 Containers can be moved around

Plenty for the bees

Container planting is useful so that things can be moved around while canopies develop or while their preferred habitat is considered. They can always be ground planted at some point if desired. Herbs and flowers that attract beneficial insects or repel unwanted elements can be shifted around to where they are most needed.

The #SquashPit area is being maximized with corn, nasturtium, tomatoes, clover, and of course, squash. The clover fixes nitrogen, helps with soil erosion on this downward sloping end and keeps the soil covered from the intense sun. It does require plenty of water though, so I’m trying buckwheat elsewhere as another cover crop to help with soil building. The only thing not fairing well here is the squash that is actually planted in the #SquashPit and the #SquashBin. #WaitAndSee The best one is the one planted at the edge of the #Plum tree where good soil has been being built for a longer time.

#UnderTheScragglyTree has multiple layers of things going on. It started last year with newspaper, cardboard, leaves, arbor debris, kitchen scraps and has since had a thick layer of bagged organic compost added. Just the other day, I broadcast buckwheat seed to see how it behaves. My neighbor is hanging iris bulbs over the fence now in plastic bags instead of leaving them on the sidewalk. I have given many, many away but planted these here #JustForFun. The sunflowers were plucked out of the #SidewalkBed where they were way too crowded after every single seed germinated. Day two, they looked like they were goners. Day three, the stalks still appear to be seeking the Sun. The leaves are all wilted, but who knows, they may continue to produce. It is a great deal of fun and learning to experiment.

It’s amazing how intense the sun is, but in the shade, so cool comparatively. As much of a nemesis as they are, this is why I let the “Tree of Heaven” grow in places. It is extremely quick growing and offers a tropical-like canopy. I rue the day of the demise of the  wonderful old #ScragglyTree, so try to have other strategies ongoing.

Tree of heaven is reported to be invasive in natural areas in 30 states across continental U.S. and Hawaii. It is highly adaptable to disturbance and a huge range of soil types and conditions, grows best in full sun and is tolerant of drought.

Sweet Potatoes are my #1 staple, so I am ever vigilant and trying hard to figure out how to be successful with growing them. The most recent slips that were installed in the #NorthFencePlot were just put into the compost to touch the ground. Previous to that, I had actually dug some in the soil below to make a hole for each one. Clearly, they prefer to be lodged into the soil and not just touch it. Live and learn.

Sweet potato vines make a great ground cover for ever more protection from the Sun. Food is wonderful and of course the goal, but the first thing is to “grow” the soil. It is the only way to have a sustainable system. The tubers are great to break up hard soil below, aerating and increasing the life in the microbiome.

I just learned today that the greens can be eaten and actually have more nutritional value than the tubers themselves.

For several years now, the Chaste Tree seedlings have been tolerating tiny pots. Every year they come back to life in spite of it. Finally, this year, I made myself give several of them away, as well as some of the “toughnut” seedlings. The three remaining Chaste trees have been re-potted as well as two of the others. Three or four more toughnuts need new pots, but I ran out of bagged mix. I don’t know the genus of the tree and have heard it referred to as toughnut because it has small sweet berries that have a soft outer layer and a hard core. Birds and my #WildGirls (doggies) love them. I think it is of the Hackberry family, but can’t find a leaf image that compares correctly. Most are serrated. This one has straight edged leaves. The bark is rough like they describe.

There are two Chaste trees planted in ground, this one next to the gate at the front. This is where all of the volunteers showed up that year. The other is on the West-most corner where the alley meets the main street. This one has been groomed to be more open and off the ground. The other is growing wild except for where I cut it back off the sidewalk. They’re in bloom now and the bees just love them. I haven’t seen any hummingbird moths yet, but they love this tree as well.

The big tree in the #SouthFortyTriangleLot is a mature “toughnut”.

It’s so wonderful how there seems to be a continuous cycle of blooming things here now to keep the bees entertained while other food things advance to needing pollination. For awhile they were hovering the tall, yellow clover. Now they are all over the Chaste trees.

I love the way the one above looks there in a nursery container. Apparently they don’t need much root space to flourish. No telling where the container ones will fit in here, quickly running out of room. Maybe they can be used to enclose #CompostIsland to beautify it some.

I was very busy last week and all weekend working non-stop on this and that.

My young friend is bringing her young, homeschooling daughters Tuesday for me to start teaching them sewing. I’ve spent lots of time getting the #garagethatwantstobeawherewomencreatestudio into shape for this event and so that I can finally start focusing on up-cycling clothing to sell in an Etsy shop. I have been delayed doing it because I have needed to take whatever jobs came my way; you know, “A bird in the hand..”. Now that I am of a certain age, I will have a “secure” income with which to meet basic needs.

So the fun and lack of frenzy and obligation starts! Hallelujah! 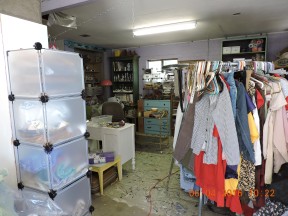 Garage/Studio for teaching and…

for up-cycling clothing to sell on Etsy

For those of you that follow First Do No Harm Front Yard Farmacy on Facebook, you may recognize the Chifforobe that was gifted to me last week. It found its way into the studio. There is no end of need for storage in there. Still lots and lots of clutter busting and organizing yet to do, but this is so improved from what it was. 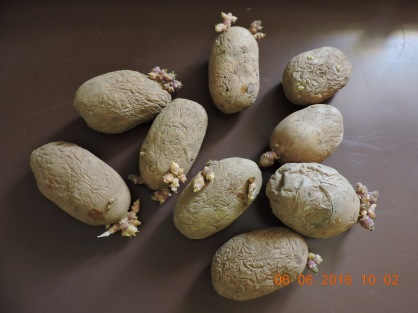 Organic potatoes that need to be planted

A few weeks back I bought some organic potatoes. Right after that I decided to quit night shade plant eating while I figured out what is causing migraine headaches. This is what happens. Now to find them a home to see if they will grow. Migraines have diminished in intensity, but I think for other reasons, coffee being one of them. Now just a couple of cups a day.

I cut up two of the taters and am just about ready to have a cup of my “kitchen-sink soup”. It has everything in it and is especially anti-inflammatory.

I’ll get this posted before the computer crashes again. I still have XP and DO NOT want to “upgrade”. I found this link to “Four ways to bulletproof XP“. I’d much rather spend my time learning this than falling prey to their shenanigans, Microsoft greedy evils.

Apricots are mostly all off the tree and I’m eating as many as I can. Need to get to dehydrating the others NOW!