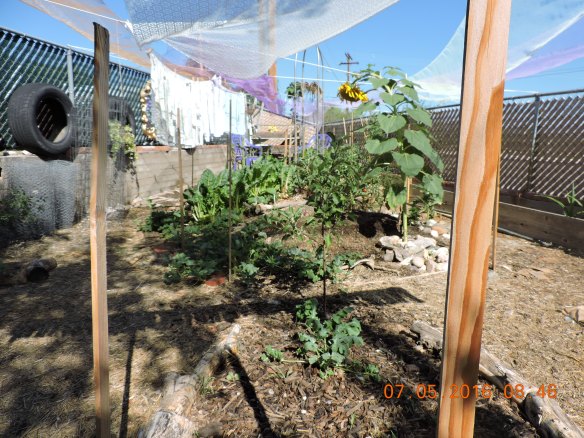 Cooling things down a bit

A bundle of synthetic rope found its way to the surface of hoarded stuff. It was stretchy, so made a much better lace from fence to fence because it could be pulled and made taut. The jute string was droopy and a total nuisance to try to navigate under. This puts it much higher. The string was installed to be able to drape things over to create some light shade over certain plants that are really affected by the heat.

All of the mesh that had been wrapped around the plums came off to harvest them and was used here for a very light sunscreen; trying to cool things down a bit. 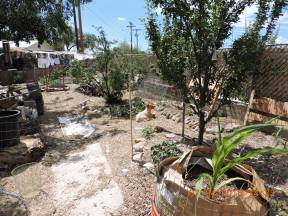 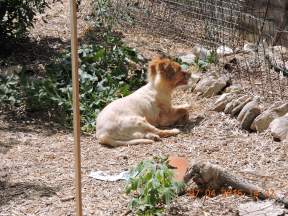 Yesterday was hot but that didn’t stop Little Red-Haired Girl from sunbathing. 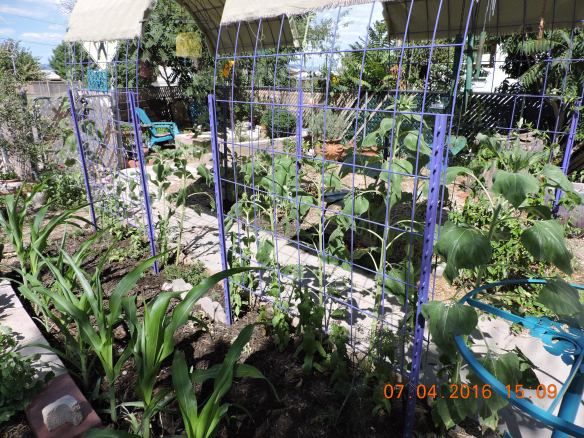 It rained for several days, so I have been trying to see how long things can go between waterings. They could probably go longer; but when things start looking like they are really transpiring, the hose comes out.

It was about 6:30pm when the hose finally came out this day. 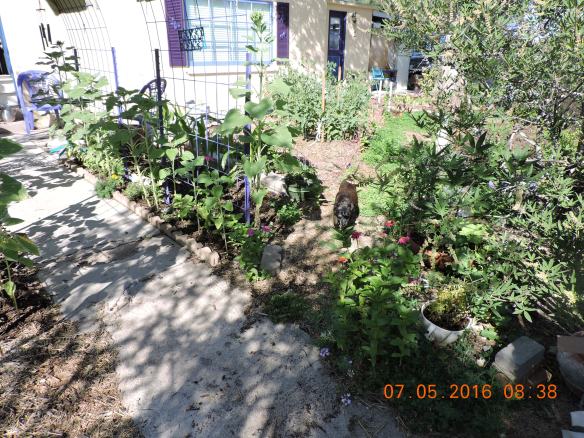 First walk of the day

It really seems to work better to water in the evening. It takes things a lot longer to show transpiration the next morning. 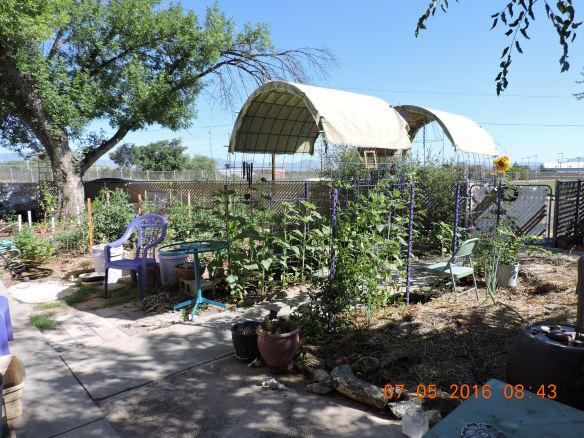 Soil building is a slow process. So is adding layers to create micro-climates. Micro-climates are essential in this desert heat and scorching Sun.

This year the focus was on planting as many sweet potatoes as possible since they are such a staple in my diet. Most of what is happening to date is practicing. Through the years, I have been saving seeds, so I started with sowing them in paper pots before spring to see what would germinate. Sweet potato slips have been growing on potatoes in water since long before spring, some still growing.

Sunflowers, tomatoes, cucumbers, cantaloupe were mostly it from seeds in pots. The sunflower transplants did okay, especially the biggest one that was transplanted to the #3HugelBed in the #SFTL. The ones doing the best overall were direct sown in spring.

Cucumbers are a fail, not sure why.

Cantaloupe are all doing well, but got off to a slow start.

Two varieties of tomatoes were germinated in pots. Black Krim from saved seeds are not doing well for the most part. The Brandywine are all doing very well. Trouble is that night shades are suspect in migraine headaches that are crippling me on a regular basis, so have been eliminated to see if they are the culprit. Need homes for tomatoes now. 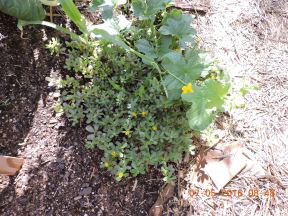 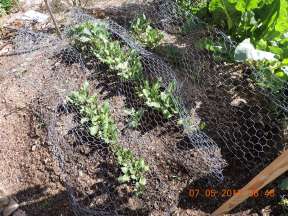 Beets on the #3Hugelbed finally advancing 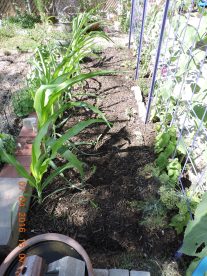 A second row of corn added and then more mulch. 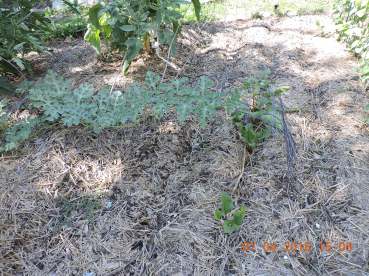 Practice makes perfect. All the while the soil is developing to be healthier, whatever doesn’t produce a harvest will be more biomass for building it even further.

Beets, popcorn, sweet corn were all sown directly and mostly doing well. Watermelon all over are transplants from many that volunteered in the back yard in #CompostCorner where kitchen scraps get thrown from time to time. Flowers all over for the birds, bees and good bugs.

Squash and pumpkin are growing in the #SouthFortyTriangleLot. Potatoes under the straw in the front on the #1HugelkulturBed the ‘Ruth Stout Method‘. They are another night shade, but fun to see if they can be grown. So far, so good. 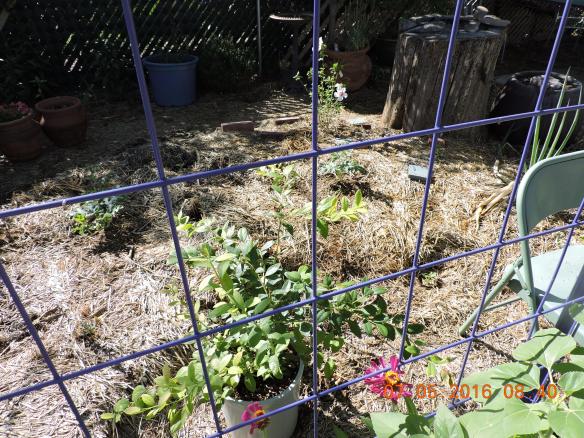 Blueberry bush in a container

Taking the advice of one blogger, I planted the blueberry bush in a container and have moved it to here where it gets a little more Sun, but not too much. It may need a feeding. It seems to be suffering from chlorosis; leaves yellowing but veins remain green. Chlorosis can be watering issues, too much, leaching nutrients out; or something as simple as not enough sunlight. It has been getting mostly dappled light. Now it will get more.

The factors leading to iron chlorosis are complex and not fully understood. A number of chemical reactions govern iron availability and contribute to the complexity of iron chemistry in soils.

Many environmental factors also create or contribute to iron deficiency. These factors need to be evaluated and alleviated to the extent possible. In many situations, attention to watering and soil conditions will satisfactorily correct minor iron chlorosis problems. 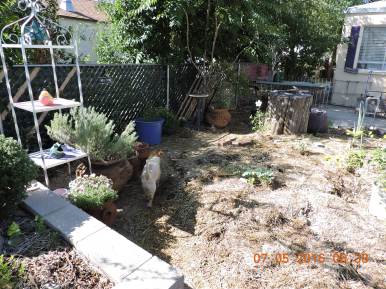 The path of least resistance

East-most corner near the street

A cool place to sit, most of the day

Most of the container plants were moved from the patio area and placed in the pathway where it isn’t easy to plant other, in-ground things. The herbs were all moved over to the sitting area near the street on the East-most corner. The vintage table set was turned around so all sides can be accessed and will now be slated for painting. Some of the chairs have already been. Pavers will be added to extend the patio to the fence.  The table has a very nice piece of glass, but it stays covered to keep it from ruin as the set is valuable. A better top needs to be made. This is an old hollow core door, falling apart; but at least it isn’t such a worry to sit things on it. 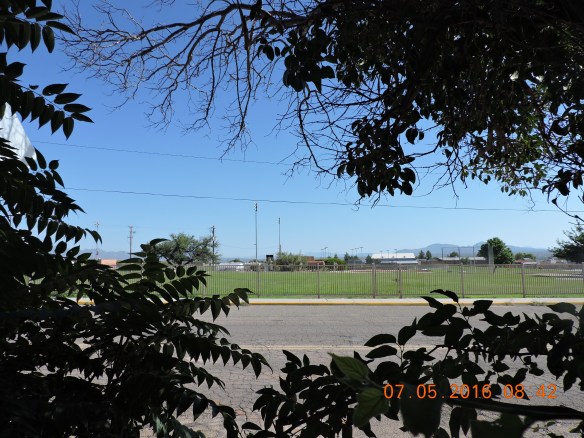 The view to the street from the East-most corner. 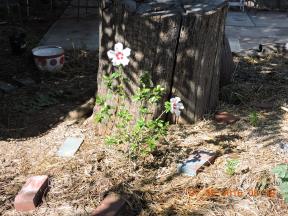 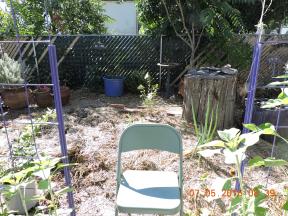 The hibiscus recently rescued from the Walmart nursery perked right up and has now been planted in the #1HugelkulturBed near the tree stump and almost centered between the arch panels. There was a potato under the straw there, so its placement fell short of perfection. 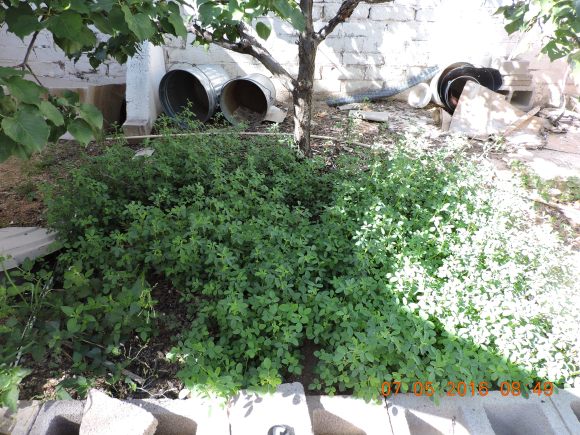 More soil building, clover under the Apricot tree also lets me know when the ground gets too dry. It grew right up through the wood mulch and seems to love the shade. I’ll let it flower, if it will, for the bees and reseeding and then chop and drop it for more nutrition. All containers are kept on their sides so if a lizard finds its way in it can find its way back out. They have a tendency to fall into things.

Bird on a bowl

Water features are all over for the creatures coming and going. Wherever it is a deep vessel, there is something added to allow the lizards a means of escape.

First Do No Harm you know.

Here’s a good little video of Ruth Stout taking you through her method.

Thanks for stopping. Come back soon.