So, I said the other day that I plan to only grow a few things; things I eat on a regular basis. I then sat down to compose a list of those things, and it grew and grew; 28 items so far.

So much for keeping things simple.

Some things aren’t so much of a ‘regular basis’, but are included in my repertoire or are things I want to eat. I don’t eat celery, per se, but have just learned that celery juice can aid digestion and might be of benefit to keeping migraines at bay; which I think to be an issue of low hydrochloric acid production that compromises breaking down and metabolizing nutrients in the stomach before reaching the intestines, (where I think the trouble begins for me).

Purchasing organic celery in quantities large enough to juice is cost prohibitive, so it has been put on the ‘to grow’ list.

Most of the focus this Winter has been on establishing ever more soil-building venues, which are taking myriad shapes and sizes; the main goal being to give the microbial life food to eat. The excerpt below from this article gives a good explanation of the process.

With the soil structures established, beneficial microbes can thrive, and here’s what they can do for our plants. Bacteria and fungi “mine” the soil particles for minerals. Something that plants can’t do. What they can do, is to turn sunlight, water, and CO2 into sugars, and they use them as currency to exchange them for the minerals with the soil ecosystem. It works roughly like this: the plant makes the sugars, sends lots of them into the roots, and pushes them out into the soil. That sugar feeds bacteria and fungi, which in turn mine the soil for minerals. In most cases, they can’t simply give the minerals to the plant. What comes along, and eats them is the mechanism that releases the stored nutrient right beside the plant root, and what enables the plant to get them.

Here’s where the good nematodes come in. Bacteria and fungi feeding nematodes eat those microorganisms, and what comes out the other end is plant food. Exactly what the plant needs, when it needs it, where it is needed, right by the micro-hair of the root. There are other little critters that help with that process – amoeba, protozoa, and micro-arthropods. They also have the role of opening the micro-fertiliser bags right beside the plant. ~

#1HugelkulturBed covered with a thick layer of leaves from #GoodNeighbor

One of the first major things done toward building with a permaculture strategy was this Hugelkultur bed. It was the first one and is still the largest. All of the years living here had accumulated major amounts of wood and debris that were saved for creating this. With so little rain here in this high desert, it takes more time for the wood inside to saturate and become sponge-like. The leaves are to benefit the top part of it. Keeping soil covered is essential.

There are now numerous bins around with a variety of materials decomposing. Good success has occurred in years past by planting in these structures. The struggle has been accruing enough material for them. Mr. #GoodNeighbor doubled my inputs this year. I’m so grateful.

This bin is all leaves from Mr.#GoodNeighbor

All kinds of composting materials in this bin

This bin was created when I needed the biggest wire round available for the #HumanureBin and robbed it from the composting kitchen scraps. They were all put in here along with cardboard, paper, leaves, dog hair (from trimming Little Red-Haired Girl)…etc.

In the back yard now are two wire rounds with stuff that accumulated while I was moving dirt around; Bermuda grass, weeds, leaves and a little dirt in between layers. I call it dirt at this point because it is primarily just bacteria with little microbial activity. The organic matter will feed that activity and eventually these will be good planting beds or compost to use elsewhere. 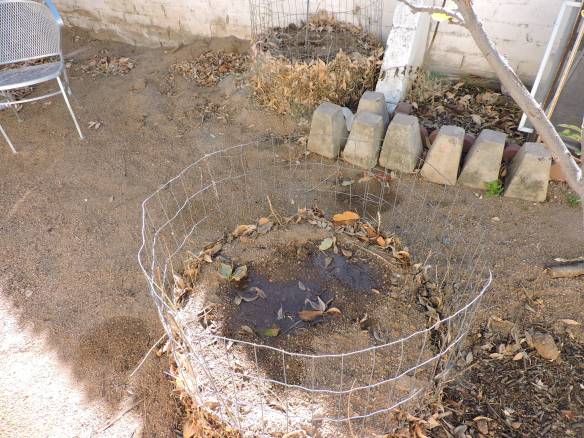 Bins filled with leaves and some ‘dirt’ atop

And, of course, there are all kinds of little beds and builds that have a variety of materials decomposing and layering for future planting. Except for pathways, all areas are getting treatments, slowly but surely as matter accumulates. In the meantime, cover crops are being utilized as well. Not too long ago, it was revealed to me that radishes make a good cover crop as their roots are long and tap the soil, doing the cultivation that supports the no-dig permaculture philosophy of building a food forest. If left in, the roots are food for the microbiome. I’m not much one for radishes, but I do like to eat the seed pods raw; they are much milder and a good foraging crop while out working in Spring.

Fruits weren’t mentioned In Alphabetical Order columns above. Those were mostly annual crops. So far there are two apple, an apricot, a plum, pomegranate, and fig tree growing somewhere on #TheCompound. One blueberry bush in a container in the front yard as well.

Growing food in a desert requires that every possible method of collecting and holding water be utilized. The best way, of course is for it to be saturated in a saving way into the ground where the plants can extract it as they need it. That’s where Hugelkultur is so valuable. There are four mounds now in various places as well as two areas where sticks and arbor debris was just buried; not making a mound. Also a couple areas where sticks and leaves are just piled on the surface.

The whole purpose of everything that is being done is so that no digging will then be required going forward, therefore allowing the microbiome freedom to do its thing without interruption. 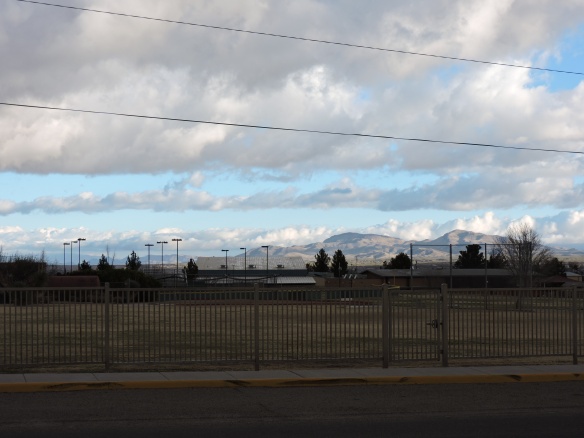 This Winter has been a good one for rain so far as well as mild temps. This will benefit the strategies in place and is allowing cool season crops to progress without the trauma of more serious freezes.

I’m hoping that some of the brassicas planted at the beginning of Fall will make it through Winter and be mature enough to harvest something before bolting and going to seed.

Another thing I’ve been experimenting with is tossing seeds of all kinds when they show up; like when the chaff from culling seeds from brassicas were spread atop several beds. Invariable, there were still seed pods on them. Some volunteered in the #1NarrowRaisedBed. They were thinned out today and brought in to see if the ‘kiddies’ might be interested. They like the smell of anything that comes from the yard. Sure enough, Lucy jumped right up and started chomping on them and then Mickey followed; he’s a copycat.

The point of throwing things willy nilly is to see where they might like to grow. It’s interesting to watch what happens. I’ve had no luck with getting cilantro to grow without bolting right away; but some thrown over the fence into the #ParkwayProject are going along nicely currently.

I admire people who map and plan and set things up systematically. I can’t bring myself to do that. If it isn’t fun, you won’t stick with it and planning too much just isn’t fun to me. So, I’ll get what I get.

Whatever makes you grow food is always a good thing. 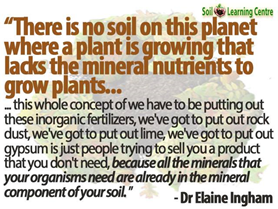 The only thing you might need to do is add organic matter and water. Nature does the rest.

Don’t dig. Feed the microbes and leave them be.