On my neighborhood walk this evening, I went down an alley where the back part of a lot has a fountain with water cascading down two tiers. It made me recall being nine years old and going on a Girl Scout trip; actually I was probably still a Brownie at the time.

Mr. and Mrs. Acker were the leaders and just a lovely, kind couple. My best friend at the time, Patty Hoyt, was there too. She was the youngest and I recall her being picked up and put on the shoulder of Mr. Acker for me to take a picture with the camera my mother gave me to take along. I remember it looking something like this:

It was hanging around my neck as we all went off on a hike. I remember there being quite a few of us marching along a mountain trail with the leaders ahead of us. We came upon a waterfall and I became so enamored with it that I just had to get a picture and started jumping from rock to rock in its stream to try to get closer. I remember thinking they all seemed to be getting a little too far ahead, but of being even more determined to get that shot then worried about their leaving. Some saw me doing it but marched on.

The memory includes the camera banging around on things as those stepping stone rocks were navigated and then a feeling of exhilaration of getting the shot.

When I got back out from the stream and waterfall, no one was within proximity enough for me to hear them. A tiny bit of fear crept in as it was getting dark, but there was an overwhelming sense of confidence that it would all be okay and that I would catch up.

Well, I didn’t catch up until, by some miracle, I found my way back to the lodge where we were staying; I had climbed out of the wilderness and found a paved road that I was following. By the time I made camp, everyone was fully engaged in getting their beds set up and had no idea whatsoever that I was ever missing.

That was my first recollection of feeling invisible and of realizing just how alone we really are in life. That image of the waterfall is still in a box somewhere; black and white and very poor, but a wild accomplishment logged in the book of my life. Maybe even the bigger accomplishment being that I didn’t lose my head when it finally dawned on me that they had left me behind and didn’t have a clue.

I read a quote lately, “The one who follows the crowd will usually get no further than the crowd. The one who walks alone is likely to find himself in places no one has ever been before.” Not sure who said it originally and it’s kind of stating the obvious.

That day as a little nine year old Brownie, I felt like I had been somewhere no one else wanted to bother with. I remember feeling all the elements fully and enjoying the experience as I went through it. Even knowing that it was risky, it felt inevitable; something I had to do and I did it. I remember feeling challenged to get close enough but striving and not giving up. I have a vague recollection of thinking I wouldn’t get close enough to take a good shot but I took one anyway, as close as I could get to it, not willing to risk going any farther or making any longer delay in catching up with the crowd.

Of course in those days, there wasn’t the instant gratification of seeing a digital image. No telling how long the wait was for that film to be developed. I do remember being so happy to see that picture though. Things were very special because of that fact then; slow living.

Wild accomplishments are available at any age. I think of waterfall events as being things that you may have only dreamed about for a very long time but finally manage to scale the obstacles and eventually get to, even if you feel left behind most of the time getting there.

There are always streams to navigate and rocks to climb. There is a waterfall in front of me most of the time as I go through life; a thing I want to get to. Sometimes things can feel a little hopeless, but most times the feelings of enamor, determination and accomplishment overcome any reluctance to keep at it.

My young friend, whom I refer to as my Bohemian Fairy Daughter, brought me the latest issue of Where Women Create yesterday. Scouring the pages is so, so inspiring. It puts a flame anew in my soul to not give up and I’m always so grateful to her for making sure I get to see it. Thank you Sammie.

The waterfall event in front of me now is to finally get out in the studio, where this woman creates, and get creating. 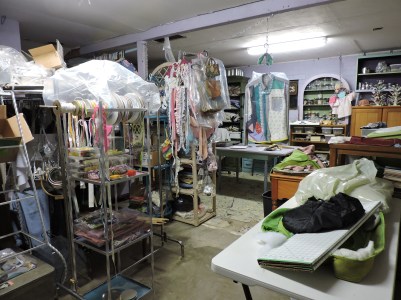 Lipstick Roses; handbag in the queue

Do you have a waterfall event in front of you?