Every late afternoon as I go on a two-mile trek around my neighborhood, I think. I’m big on thinking, but this allows for a rather clutter-free venue for doing it. Except that there are plenty of stimulating distractions as I walk without a cell phone, i-pod or any other electronic device.

I can’t speak for almost every driver that I pass with their eyes gazing down, one hand on the steering wheel, one hidden, sometimes both hidden, but mostly all with eyes down. I suspect they are all looking at devices.

People that I pass who are walking also often have something in their ear or in their hand. Sometimes they rip a plug out of an ear when they see me smile and my lips start moving. “What!”, they ask. “Hello”, I repeat.

There is one man I often cross paths with and we’ve gotten to stopping for a brief “what movie are you watching tonight” conversation. He lives alone too and asks me if I get lonely? “No, I don’t”, I respond. He says he does a little. He has two leads, one in each hand, no devices as he walks “his girls” around. They are both very old as he and I are too. They walk very slowly, I very fast so we often cross twice. I love to see his doggie’s butts in front of me as I come upon them. They are all so happy, out walking together. One of the dogs is always off stretching the lead to sniff; the other stays on the straight and narrow.

There is another lady whose yard I go by and it has chickens in it; five or six beautiful things. Once in awhile she is outside and we stop to chat too. Her name is Francie and I made myself remember it by thinking of the Gidget movies. She had forgotten mine and apologized. She commended me for walking and complained that she does not. I always invite her to walk with me. She hasn’t taken me up on it yet.

A little farther up, I make a special whistle for Jewel to recognize that it is me that is coming and that she doesn’t need to bark if she doesn’t want to. She has a special conversation for me anyway, not really barking, “Arr, arr, arr, arrrrrr!”. Her mother was out yesterday with a friend at her gate and she looked up to tell me, “She’s talking to you!”. I shared my special whistle so Jewel’s mother knows that I make sure to talk back to Jewel each time I pass by. I always tell Jewel how pretty she is. She’s a black and white, very fit boxer-pit mix of some kind I think. “Hi Jewel. You’re so pretty”, I say. I want to tell her mother that if she ever needs a home…

Sometimes I run across a homeless man who makes his two beautiful hounds, (one probably the mother and the other one of her babies), traipse around the neighborhood with him everywhere he goes. Sometimes he is on foot, other times riding a bike. The dogs have to keep up with him, strapped to whatever he has with him collecting junk; a cart or a bike with a cart. I try to divert my path if I see him ahead as it breaks my heart the way he treats them. It’s all I can do to not chastise him. I have heard from a friend who lives near him that he gets mad and pounds on them. Oh, my heart aches for animals that are not treated right.

Today on my trek it was snowing broom seeds everywhere I went. Desert Broom is everywhere here and most people think of it as a nuisance; an invasive species.

Of course, I think they are beautiful and that whatever will be should be. There are a couple in my yards.

I ended up the proud owner of a very nice pair of lops because a friend wanted me to take out broom plants that were interfering with people getting up her long and winding driveway. She can’t do it herself anymore so donated the lops to me so that I can do hers for her once in awhile. I have only done them once. I love the lops. Lucky me.

Desert broom is a vertical, evergreen, densely-branched shrub usually 3 to 6 feet tall, occasionally up to 10 feet tall. Its many fine twigs are green; the tiny, linear leaves are deciduous during dry periods. The plants are dioecious (that is, each individual plant bears only “male”or “female” flowers) and blooms in the fall. The wind – dispersed, white-tasseled seeds are produced by the female plants in such abundance that the plants and nearby ground appear to be snow-covered.

Desert broom grows in the desert, desert grasslands, and chaparral from 500 to 5,000 feet elevation in Arizona, California, Sonora, and Baja California.

In the winter the cottony mounds crowning the female plant are composed of countless individual fruits. Each seed is attached to many silken, white hairs called pappus. The pappus, serving as parachutes, carry by the wind, the seeds which drift to the ground, collecting everywhere!

Desert Broom is relatively short-lived. It is rarely browsed by mammals, but its strong shade fosters the growth of other plants. Desert Broom is most prominent in the higher areas of our Arizona stream beds.

Lizards are brumating at this time of year. I ran across this little baby while doing some cleanup work today. It was moved to a safer location. It was between some door skins that needed to be moved so that compost could be transferred. First do no harm. 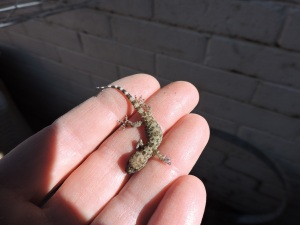 There is just one simple little thing that any person can do to make this a better world. First do no harm. After that, all other things can fall into place.

Just one thing. First do no harm.

Imagine if we all just did that. Imagine.