Very soon after I took over this property, I noticed a little prickly pear cactus growing out of the hollow of one of the footer blocks of the fence in the yard I refer to as the #SouthFortyTriangleLot — it’s shaped like a wedge and it is on the far side of the property away from the main house.

Can’t remember exactly when I noticed it growing but I watched it and watched it as it grew. It seemed to grow very slowly for very many of it’s early years There might even have been a time or two that I thought it had died. Suddenly it found its footing and just took off until that fateful day it collapsed because of its own weight.

It could be two years now that it got so big it toppled. The biggest hunk of it just fell to the ground. Eventually, I was able to separate all the pieces and went about laying them all over in various assorted places around the property, wherever they made sense to be growing — some inside the fence and some outside. I don’t think any of them didn’t take. I have Mickey Mouse-looking prickly pear plants all over now with their new paddles growing from the pieces that sent roots into the dry desert sand just like they were supposed to.

The mummy plant took off again like a race horse as soon as the big chunk fell off and she is now even bigger than she was before — it happened in what seemed like no time. I was just amazed.

All through the years, she has never, never produced a pear. Look at her now!!! Mama Mia, prickly pears galore!! Some new paddles again this spring too.

Is that how prickly pear cacti have babies — topple and root on the ground?

Where it all began

The strings in the above image are the anchors for the tarp that goes over Buster’s, (the girl turtle), pond.

Permies.com has a great forum “Prickly Pear are the Perfect Permaculture Plant for Parched Places” describing some of their many benefits: “The mighty prickly pear. Great for vegetable, fruit, dyes, living predator fences, erosion control, medicine and drought insurance. Talk about stacking functions!”

One of mummy’s offspring behind the pomegranate tree already has quite a few new paddles growing. All that was done was the broken off and healed paddles were laid on the dirt with the side with signs of roots growing from the areole to the dirt.

All these years now trying so hard to grow food. It is NOT easy in a desert. I’m thrilled to have all this propagation of prickly pear. I understand the paddles make something very good to eat and, of course, the pears are very loved. Here is a group in my area teaching all about it: Desert Harvesters.

I’m ever more conscious of how important growing food is and am stepping up my efforts, not that I haven’t always been trying. I am just now not giving myself any leeway to get the slightest bit lazy.

Just at the beginning of the coming spring, I took all my saved seeds and broadcast them all over just to see what might like to grow where. It’s a lot of fun watching. I also planted a lot of the little trees that have been several years in a nursing condition — under shade in pots. They started telling me they wanted their roots in the ground, so I obeyed. They are my dictators and I love them telling me what to do. They are the only ones who are able to get away with it. 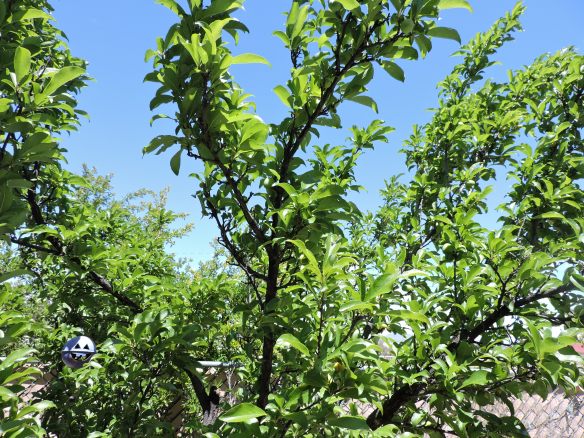 Plums for me and the birds

As some things are fading away, like the beloved #ScraggleTree, new things are getting started. All the little trees went in wherever they fit and I will see how things go. I hope they all survive and I just have lots of pockets of shade that things might just like to grow under.

Try, try, try. If at first you don’t succeed, try try again. It’s all so much great fun.

The sky as blue as blue can be above the ScragglyTree