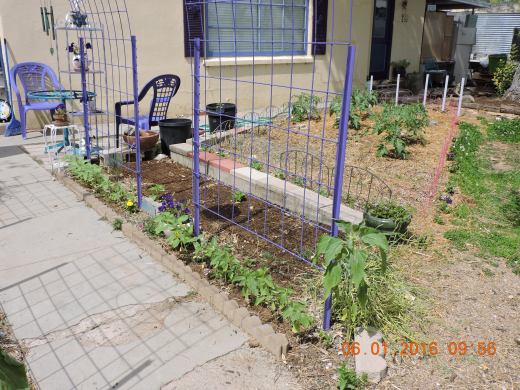 This #RaisedBed is where things first got serious toward growing food. Early on there had been random tomato attempts here and there, but nothing amounted to much. Fruit trees were being planted simultaneously. It’s amazing how much one needs to learn, even to grow tomatoes.

It’s all about building soil. Reading “One-Straw Revolution” ~ Masanobu Fukuoka, about the renowned revolutionary farmer in Japan last night, I was reminded of just how important it is to “First Do No Harm” and let nature be the guide. His second of four major rules is “NO CHEMICAL FERTILIZER OR PREPARED COMPOST”.  Asterisked, below it clarifies that “For fertilizer Mr. Fukuoka grows a leguminous ground cover of white clover, returns the threshed straw to the fields, and adds a little poultry manure.”

Later in the book he says it is sometimes necessary early on to do things, but that gradually, refraining from other than what would happen in nature is recommended. So I have added bagged compost and brought in straw to cover the ground. I am using clover, but it takes a lot of water, so I need to try other cover crops. I have Buckwheat seeds to try. “Buckwheat grows in soils with poor fertility and requires little water after germination.” Of course, Mr. Fukuoka  had acreage and was growing fields of rice and winter grains along with orchards of citrus.

The main thing is to learn what nature does and try to mimic it. 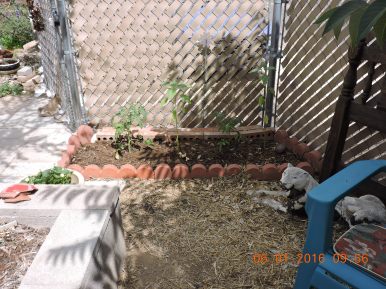 Tomatoes and Sunflowers near the front gate

East most corner in the front

I try things in different locations and conditions to see what works best here in the Southeastern desert of Arizona. This is the east most corner and has shade off and on. It makes a great sitting area and doggy traffic-watching spot. I left some fence slats off so they had a place to sit and stare. 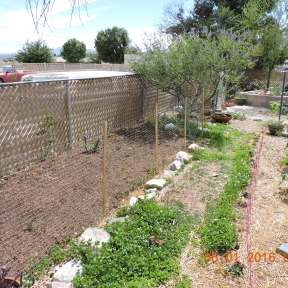 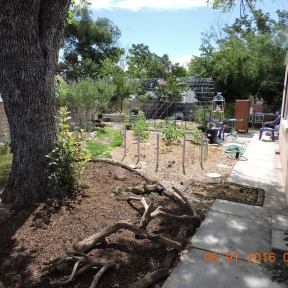 Anyone who will come and see these fields and accept their testimony, will feel deep misgivings over the question of whether or not humans know nature, and of whether or not nature can be known within the confines of human understanding. ~ Masanobu Fukuoka, The One-Straw Relolution, pg. 29

Methods of insect control which ignore the relationships among the insects themselves are truly useless. ~ pg. 27

Monday I was in the #SouthFortyTriangleLot watering when a snake slithered  along the edge of the fence footer. I was almost upon it. I jumped back and skedaddled, but tried to remain calm and get some kind of view of it. It didn’t appear to have a rattler. It went quickly, but seemed docile. 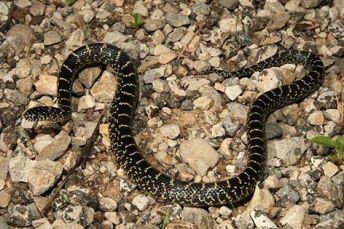 To the best of my recollection, this web image represents what I saw.

It went missing. I think it has a home under the patio slab. I have been tip-toeing around, trying to believe it’s a good thing to have around.

It’s not always easy to allow nature to have Her way. We want control.

Nature is the teacher. I try so hard to listen. 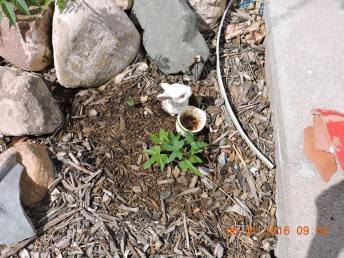 I have caught cottontail bunnies making escape several times lately and they always head for the gate gaps, so I have installed chicken-wire foils to encourage them to stay out. Ceramic bunnies are all I want to see. This one got crowded out of the strawberry pot, so got brought up here where there is a sweet potato slip to watch and a garlic I forgot I pushed in there. 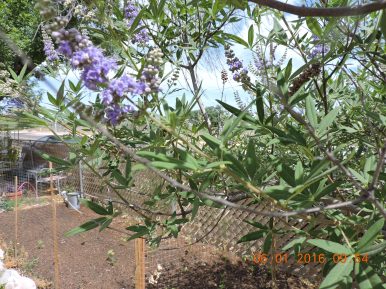 The chaste tree is coming in to bloom. It won’t be long before I see hummingbird moths. They look so much like hummingbirds. 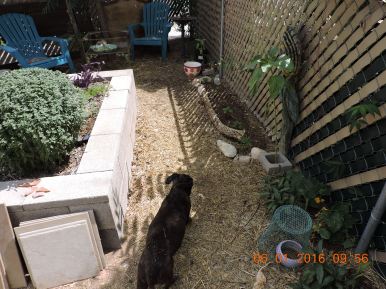 Gertie has been my walk-around companion as of late, since Little Red-Haired Girl wants to find a spot and spectate now. 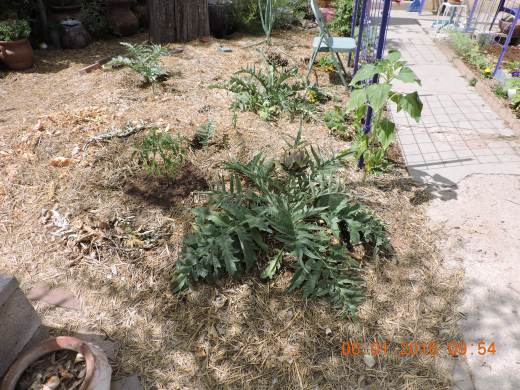 Four artichoke have been harvested, but not cooked yet. Others are being left to flower. I understand they make great dried specimens. The chard and beet pods have been removed to save for seed and now this needs new plantings. This is the #1HugelkulturBed and is being allowed to meld into the surrounds. 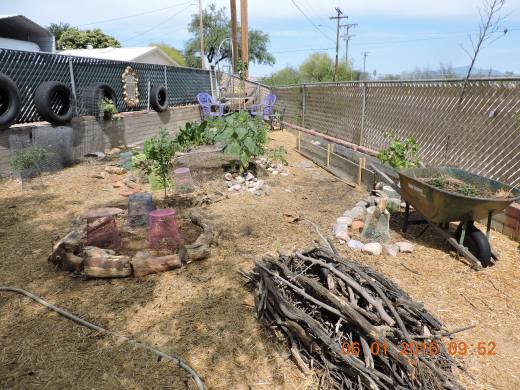 This seems to be a good time to take pictures. Both sides, East and West turned out good today. The morning was balmy, quiet because “Schools Out For Summer”, with just birdsong for music and a hint of a cool breeze. A slight cloud covering. It’s A Wonderful Life. 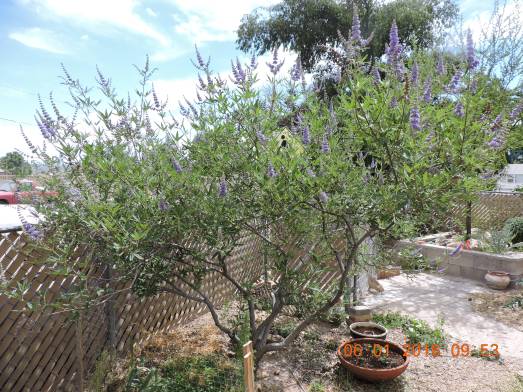 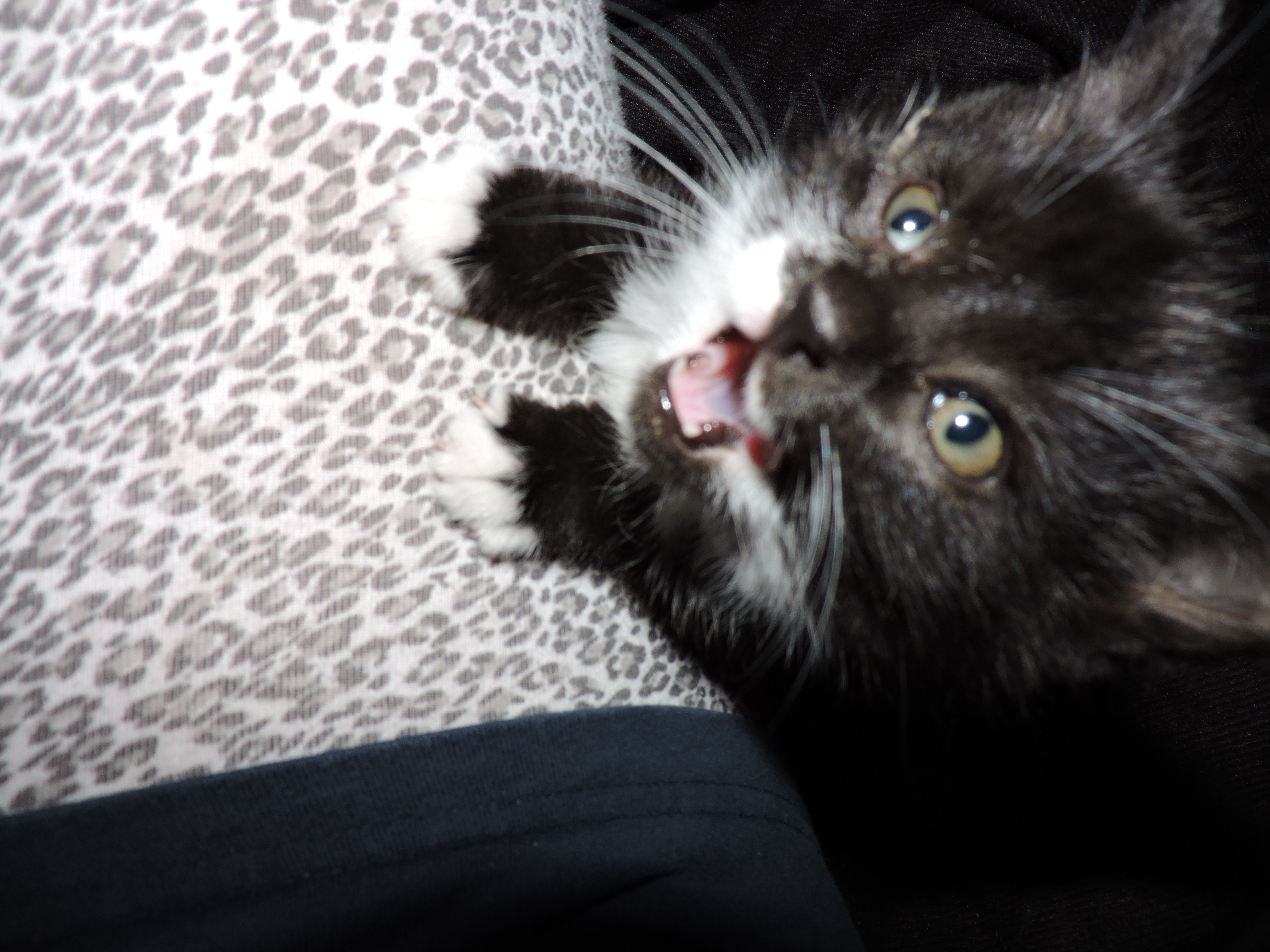 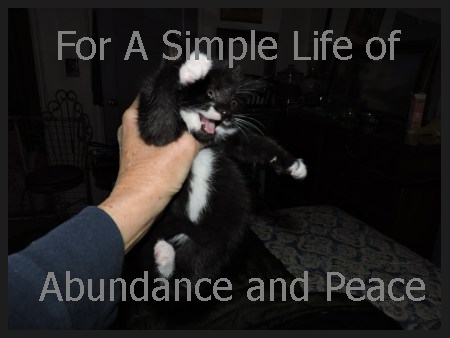