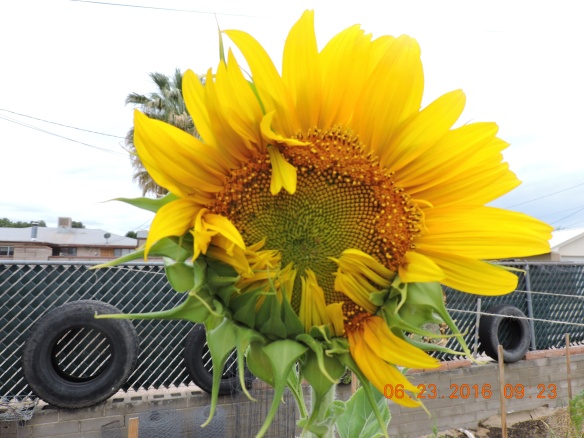 As early as was allowed, Social Security Benefits were applied for. They hold back a month and then there was the issue of my late-in-the-month birth date. Checks start rolling in August. Existing funds have been being used with great frugality to stretch to then as odd jobs have been relinquished in anticipation of this event. It’s like giving notice at a job you hate, it’s nearly impossible to work out your notice. I didn’t bother.

The goal is to finally start doing creative sewing. No longer being dependent on the hodgepodge of little jobs that have been sustaining me for years now, sewing/alterations/housekeeping/shopping/errands/taxi service/yard work/etc., they have been quit earlier than they might should have been so that I could focus on organizing my studio for maximum efficiency for this anticipated creativity.

Always working with the bird in the hand, I say that I live defensively; but I actually plan quite a bit. At least in my head. This has been planned for a long, long time. It always seems that the time will never come and then suddenly, there it is. I’m so excited and so very happy to finally be feeling this kind of freedom.

My lovely little niece sent me a private message on Facebook to say, “Happy Birthday Aunt Sarah! I hope your day is absolutely wonderful!!” To which I replied, “Thank you sweetie. I’m living my dream, so most days are great. Love you.”

I feel like a kid again. Free to be.

I don’t have a lot of close friends, being quite the loner. The ones I have are cherished greatly. Fitting the characteristics of an introvert, I love interacting with people, but it exhausts me. Where an extrovert is energized by it, I need time to recover. My inner life is rich and the outer life has been fitted to me like a glove. I made all the alterations myself.

So, for my birthday, I did what I love to do, I worked in the garden and puttered around in my simple life of peace and abundance. I couldn’t have been happier.

Squash and melons seem to withstand the heat the best

It has been so scorching hot, 110° one day. Probably hotter, but I don’t check often, just now and then and to post sometimes. I don’t suffer as much as I think some of the plants do. Yes, it’s uncomfortable at times. Most of the time I just don’t think about it. The most discomfort is for the plants and animals.

Working on strategies to increase water retention and soil fertility for a long time now, things just haven’t evolved enough to matter much. Yet.

Squash and melons seems to be able to tolerate it the best. 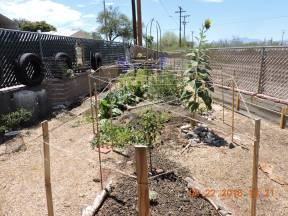 Suddenly, in leisure mode, an idea came for a way to create some shade to hopefully cool down the soil surface temps and keep the plantings from transpiring  quite so much. 4′ stakes were pounded in where they would benefit hose movement as well as to allow for jute string to be strung crisscross for hanging something to shade. Some bags of mulch had just been emptied, so were made into fringe to drape over the string.

That was just too much fussiness and aesthetics are important too.

Seed catalog made into fringe

Tiny clothespins holding it on

Another idea emerged. The strings were removed and restrung to run from the back fence to the front fence and then a seed catalog was taken apart and cut to make a more attractive fringe and then draped over the string and secured with tiny clothespins from a crafting stash dating to the early 90’s.

Much better. It is about to rain, so we’ll see how the slick paper survives. We’re officially in Monsoon season now. 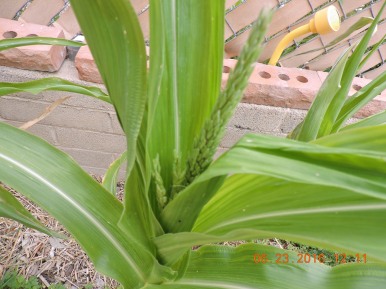 Something new for the bees

Corn in the #SquashPit area doing well. Another artichoke flower opened. Something new for the bees. They are crazy for it. Its fun to watch them crawl in. It’s also fun to see what becomes of what might have been food. 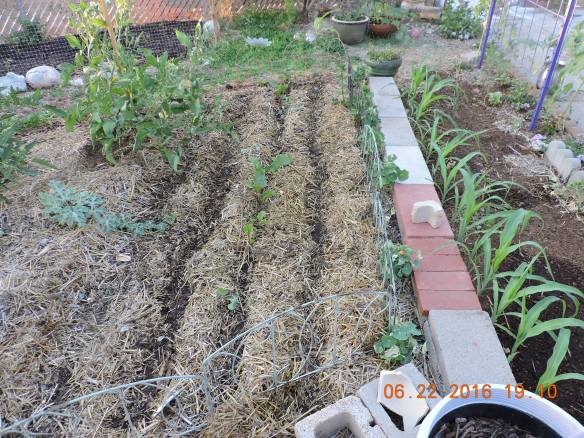 The straw was pulled back for two new rows. Beet seeds were sown in the one close to the nasturtiums and also to fill in on the row already growing where some went missing. The next row will be sown with beets in a week or two so a succession will occur, hopefully. Chives are barely visible in the last row. Planted too late it seems, but mostly for their benefits as a companion plant. Popcorn on the right side of the cinder blocks. I tried transplanting one since they are so close together. Not successful.

Corn needs plenty of space for two reasons — it is a heavy feeder, and it is primarily pollinated by wind. As grains of pollen are shed by the tassels that grow from the plants’ tops, they must find their way to the delicate strands of silk that emerge from newly formed ears. To make sure silks are nicely showered with pollen, grow corn in blocks of short rows rather than in a long, single row. In a small garden, 15 plants set 1 foot apart can be grown in a 3 x 5-foot bed.

I guess I should have grown at least another row of corn there. Is it too late?

Well, Summer is here. Can’t remember it being this hot, this early. So timely that information about this book crossed my path lately, “Growing Food in a Hotter, Drier Land. Lessons from Desert Farmers on Adapting to Climate Uncertainty” and it has been ordered. Hopefully it will shed some new and encouraging light.

Continuing to simplify and de-clutter my life, I pulled down all of the books from shelves I built in my bedroom to let go of most of them. It was impossible not to read through some of them just to see if I was sure they should go. Some took no thought at all, i.e., design/drapery books. I have no desire or intention to revisit that way of making a living.

“Our society is much divided. There are fewer and fewer things that people agree about. The furor of the sixties has died down, but the conflicts that caused it persist. The bitterness has merely been diluted with despair. The war is over, but peace has hardly reached epidemic proportions. Our economic structure is crumbling. Cities are going bankrupt. We are exhausting our physical resources while our human ones lie fallow. The quality of all our services- transportation, communication, health, education, and so on- deteriorates, while their costs increase. Some people can’t afford to heat their homes because we all want to ride expensive vehicles on crowded roads at high speeds, killing one another and polluting the atmosphere. During the years that we tried heroically to annihilate the Vietnamese population and destroy its countryside, we slaughtered half a million Americans and did massive damage to our own landscape just driving around. Intent seems to have nothing to do with it. ” The Pursuit of Loneliness-American Culture at the Breaking Point ~ Philip Slater, revised edition, 1976

This book I kept. I only post this excerpt to bring light to the fact that “the more things change, the more they remain the same”.

I think we try too hard to make it difficult.

Let’s all simplify. Shall we?

Me at age 9 with my one friend and my  babysitter.