It’s coming on Christmas; the time of year we seem to value home the most. Growing up, I was referred to as a “homebody” and the most likely one in our family to have children. Truth is, I was and still am more likely just an introvert. I do love home, but as much because of how it allows me the security to be an introvert as that I am any kind of a worthy homemaker. I loathe housekeeping, aside from the interior design aspect of it; which does require cleaning on occasion to effect the results I want to see in that respect, (most of my career was spent in helping others create the homes they wanted). Cleaning as a rule is so much vanity; more dust settles as soon as the rag leaves the surface. Talk about insanity: “doing the same thing over and over again and expecting different results”. ~ Albert Einstein

I am aware that “Cleanliness is next to Godliness”, but there are so many more interesting things to do. I got that from my mother, who also, was not much interested in having an ideal home, but rather loved her independent activities of choice. This is not her home. We were visiting a friend of hers, sometime in the 80’s. That was me on the far right. My older sister and I had no children; our younger sister went on to have four. The oldest of hers on the left, ‘grew up’ with us.

My Mother and her favorite pass time, her family

Before my mother died, she had me pulling weeds in her little patch of vegetables. I didn’t have a home of my own, so I would play in the dirt around her home whenever I was there; which was often. Once upon a time I brought her a gallon sized container of ‘Red Apple’; which over the years, spread all over her yard and eventually was pinched and planted to create a screen of sorts around her front porch, growing up wire fencing attached to the vertical supports.

My first tiny apartment had a terrace full of potted things, which I watered with a hose attached to the kitchen sink; mostly succulents. That was California, where succulents can live outdoors most of the year. Not so, here in Arizona. I have to bring mine in and out of the garage during the winter or they turn to mush.

So my Home Sweet Home is now allowing me the opportunity to engage in independent activities of choice, like my mother did. And those activities have now been defined to be gardening, sewing, animals and health related activities.

I do care about the appearance of my home, but it is a slow process getting it to where I want it to be; mostly because I have chosen to have more free time than money, per se. These tiles were free to me from a man who saw an ad I placed in our local trader. Now the fun begins.

This last week was spent ‘redesigning’ the back yard some. When I first moved here, I did some things there that make little sense to me now; moving dirt around. Dirt is being moved around again to level things out for more planting opportunities. 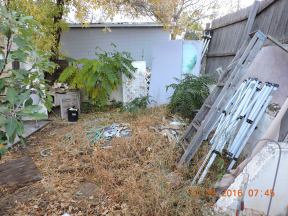 Before clearing out the ‘messes’ 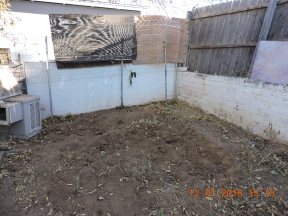 After clearing out the ‘messes’

After clearing out the ‘messes’ and shifting the dirt. More shifting yet to be done.

Sunday my neighbor brought over all of the leaves he raked from his yard. This same neighbor continues to bring me resources as he gets them. He apparently does work for others. He’s the same one who brought the oleander debris that you can see in the last post. He and his girlfriend are very fond of my tomatoes, ;). 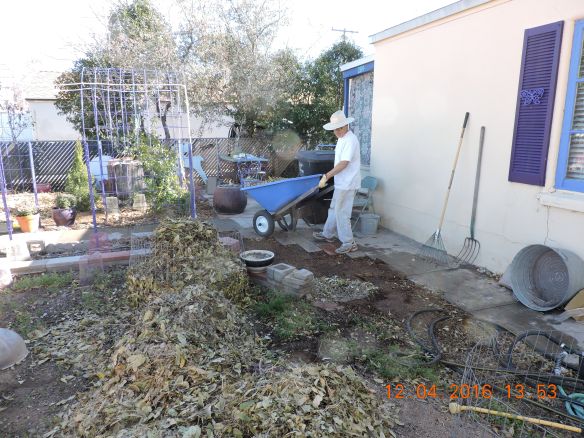 #MyNeighbor bringing me all of his leaves 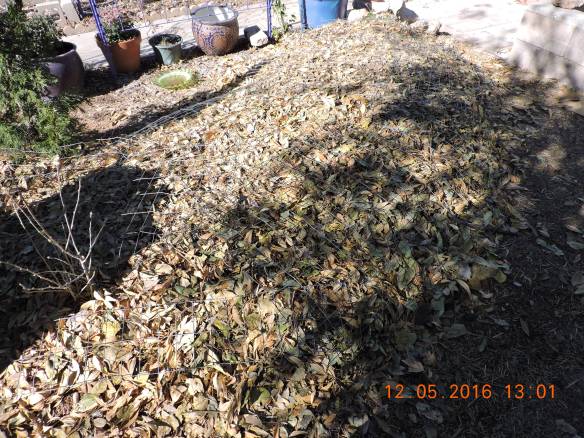 #MyNeighbor used my huge City trashcan to deliver the first load and it all went on the #1HugelkulturBed.

The next several batches went to fill up two wire rounds that were positioned at the shady side of the #RaisedBed; performing double duty as a partial cover for the bed over Winter and as planting mediums come Spring. 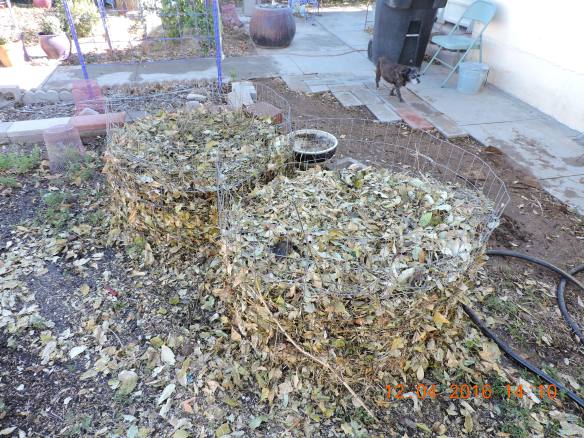 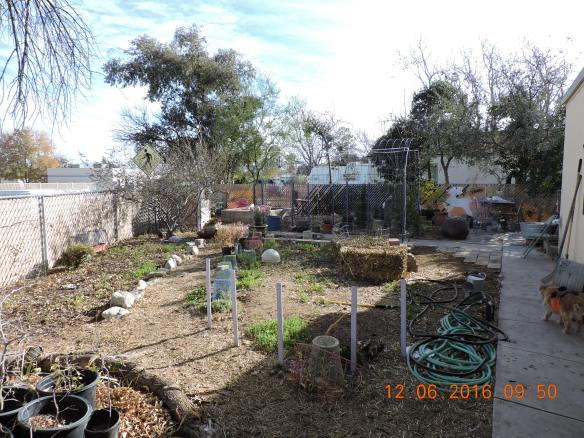 Not much is going on that is visible to the eye. A few brassicas are trying valiantly to grow, but mostly there is soil building going on. Winter is a good time for this and the strategies also yield habitats for overwintering critters as well.

Next fall I shall plant more radishes and beets as they seem to be able to brave the relative cold here in Arizona, at least for a time; and that time helps to send their substantial roots down for breaking up compacted soil also helping to build the microbiome.

A hint of Spring to come. #AliceInWonderlandishness

Spring is closer than we think. It won’t be long before it will be time to start some seeds indoors.

People often comment that something about my Home Sweet Home makes them think of Alice in Wonderland. I think it’s the colors that I favor; but there are other things, like this rabbit and a big collection of teapots and cups and saucer that I have accrued over the years.

Whatever makes your home yours, I hope you have a wonderful holiday season and that you are engaging in independent activities of choice. It took me a long time to find my way to here where I am able to do just that. I’m so happy that the time has come.

I was commissioned by Home Depot (twice; two different stores) to design and paint a Santa in a sleigh and two reindeer for a Christmas display. This reindeer escaped with me, unpainted. He is jig saw cut out of plywood and has endured for at least 15 years now. The other two sets ended up in their dumpsters. 😦

Morale of the story: There’s no place like home sweet home for the holidays.